When one Marathon is not enough…

Our very own Claire H has been at it again! Not content with one marathon, she’s went ahead and ran an ultra-marathon two weeks ago and then Manchester Marathon last weekend. At the end of the run I asked her how she was feeling and she couldn’t put it into words at the time (well not polite ones anyway), but after a few days, she was able to put her thoughts together and work out what she learned from a challenge like that.

I’m not sure what possessed me last autumn to sign up for Manchester Marathon.  For those who know me, my signing up for a marathon was not an unusual occurrence.

However, the 2017 Manchester marathon, was on 2 April.  Seven days after I was taking part in the 50K Canalathon. Yes, I would be attempting to run 26.2 miles just seven short days after I’d run 50k or approximately 31 miles.  What was I thinking?

If I’m perfectly honest, it’s not the first time I’ve done this.  In 2014 I took part in a 30 mile ultra two weeks after completing a marathon and in 2016 I took part in the Canalathon approximately three weeks before the London Marathon. So why not do it the other way round and seven days apart.

The Canalathon has a 50k, 75k and 100k option.  I was doing the short distance.  The 50k is a great run which starts with a lap of a car park in Manchester (the glamour) before heading along the Rochdale canal all the way to the finish in Sowerby Bridge.  It is a simple route and no navigation is required, just an ability to follow the canal.

I approached the run knowing that I would be run / walking although I hadn’t got a firm plan in mind.  My training had been interrupted by a niggle in my hip which meant my longest training run was 18 miles.  I’d also been sent flying by a dog which meant I’d had to take two weeks off completely to let the swelling in knee and elbow subside.

As I approached halfway I was becoming aware that I was walking a lot more than I was running.  After that I got a plan in mind which I stuck to throughout the last 15 miles – I would walk the first quarter of every mile and run the other three-quarters.  That tactic got me to the finish in a relatively good state and I don’t think I was overtaken in the last ten miles, which I’m really pleased about.

Having said that I’m sure I saw a zebra in a field.  Maybe I had spent too long in the sun?

My legs seemed to recover quite well from the Canalathon.  I went for a very slow mile jog on the Tuesday and ran parkrun on the Saturday before heading over to Manchester.

If one of my motivations for signing up for Manchester had been to find my limits, I found them at around mile 12. 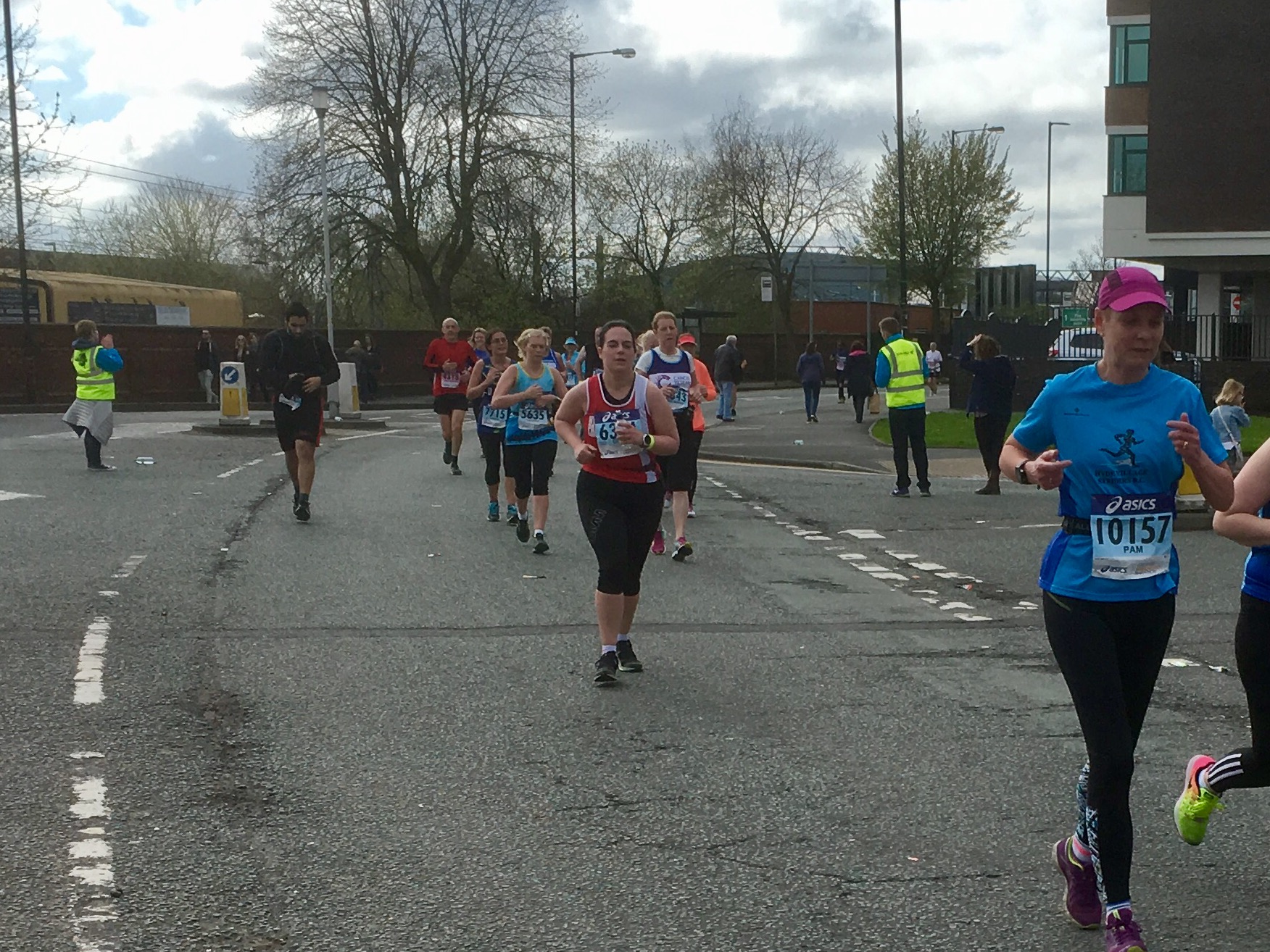 (mile 13…when things were getting pretty tough)

The first 11 miles or so had gone rather well, I’d felt comfortable and was running within myself.  Then things started to hurt, my back kicked it off, then it worked down into my hip, knee and ankle.  Before long I was cursing myself for thinking that I could do both races at all, let alone well.  It became a very long, slow run to get round.  But get round I did, only 20 minutes off my marathon PB. 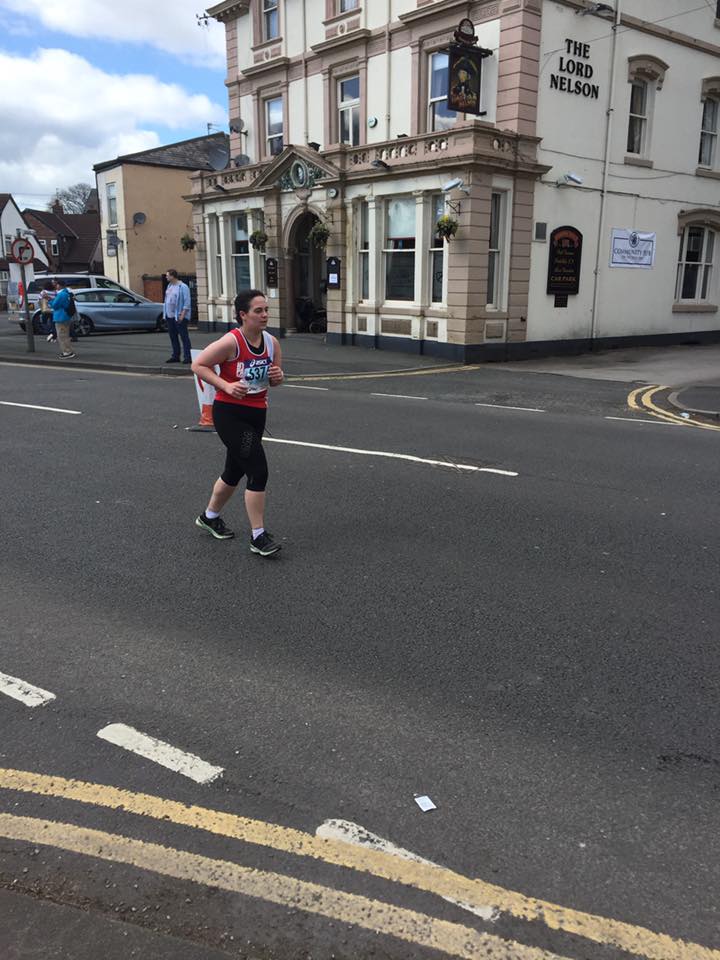 (mile 23…hanging on with end in sight)

So what did I learn from the two weekends?

I think the main thing I will take from the experience is that running a marathon (or longer) is as much a mental activity as it is physical.  At Manchester I wasn’t able to motivate myself mentally to push through the aches and pains.  I let the negative voices in my head who were telling me I couldn’t do it, win.  To run a successful marathon you have to believe you can.  When I stood on the start line at Manchester, I’m not sure I believed I could.

Regardless of my finishing times, I did complete both events.  I proved to myself that I can push myself more than I do in training, in races and in life in general.  After all it must take a special kind of crazy to even think you can do what I did.

Finally, having completed both events I have no desire to do anything like this again. Ever.

Although, I may have signed up for another marathon the day after Manchester.  Just the one, trust me on that.

Thanks for popping in to read our blogs.

We base lots of our blogs on questions that our clients ask us, trying to dispel myths and give you sensible answers to those important questions as we go along.

Some of it is a bit silly, some of it we really go away and research and work out, so please send us your questions and we will find a way to work it into a blog.

Finding the fun in fitness .

Based in Leeds, West Yorkshire, at All Change Personal Training we can deliver personal, group and corporate training sessions tailored to fit your needs, your goals and your time schedule.

@Darth_Pingu Any leader in the world would be better than ours. Except maybe his best pal trump.

Anyone training with me during the outbreak is able to get their whole family involved at no extra cost; kids, parents and of course family pets....Mr Lenny the handsome Spaniel joined rich & @KarenGrindrod for their session today! #whatadude #fitfamily #fun #dog #fitspo #happy pic.twitter.com/uFs7…