Goodness me, wasn’t the London Marathon just brilliant yesterday? The elites are always amazing – they go faster over a full marathon that I’ve ever gone in half marathon!!! What I really like about the Marathon though, is the human stories. The people who run for the most touching reasons and raise money for some really important causes. The ‘everyman’ for whom running is not a natural thing to be enjoyed but a complete slog. This year the headline charity was the Royals project ‘Heads together’ which aims to remove the stigma around mental health by normalising the conversation.

It reminded me of an amazing blog I read last week that I really wanted to share. My friend Lucy writes with searing honesty about her own mental health and how important exercise is in managing that. When I asked Lucy if I could re-publish her blog her response came back immediately saying ‘I try and talk about these things so it’s more ‘normal’ easier for others that don’t find it easy to talk about things’. What an incredible attitude. So much respect. Enjoy her blog!

I injured my hamstring in a stupid drunken dancing competition at our work Christmas party on the 14th December last year.  Since then I’ve gone from a form where I managed to PB every distance I’ve ever run in 2016 (1 mile, 5K, 10K, 10 mile, Half Marathon and Marathon) to my first run back being an incredibly painful and slow flat parkrun at Pontefract that took me more than 10 minutes slower than my usual times.  It was my fault and I’ve certainly paid the price for being a bit tipsy and over exuberant. I’m incredibly competitive in pretty much everything I do and I am generally rushing around getting things done, so to have to slow down and recover has been tough for me both physically and mentally.  (I make it sound like it was worse than it was – I was limping for a fair few weeks and had to ice it for the first few days.)  I’m pleased to say that after a fair few physio sessions, lots of leg exercises (could do more), encouragement from Alan, Hyde Park Harriers and lots of other friends and family I haven’t gone completely mad and I’m managing to chip in reasonable (if still painful) running performances again. So what has any of this got to do with being an Anxious Extrovert? After coming off being on antidepressants for 12 years in June 2013 running has been my therapy.  It’s not the only thing that keeps me with a good state of mental health, but I know that in no particular order I have to concentrate on the following things to make sure I keep healthy:

It’s quite a long list, but I find if I miss out bits of it for too long, my mood dips considerably. I used to think that it would be easy to tell if my mood was “dipping”, but sometimes it creeps up on me, I’ll find myself in the middle of a task staring off into space, or leaping from one task to another to another and another…achieving nothing in the space of a few hours.   I’m fairly well practiced in making sure I stay on top of depression as I’ve described above, but what I’d not appreciated was a “side effect” of long term anti-depressant use was that it meant for around 12 years I never really had to process or learn to deal with anxiety.

After a few obvious triggers of life changing events like moving house coupled with the reduction in running, I found myself at the start of the year experiencing high levels of anxiety and being a bit at a loss of how to make them reduce.

I’ve recently seen a few posts on Facebook explaining what anxiety feels like to different people and I’ve got my own examples here are a few.

Usually a good dose of running and keeping busy has been enough to stave off depression and anxiety, but without being able to run as much as I usually have done it’s been a bit harder to shake.

So let’s get to explaining my Anxious Extrovert phrase.  Some of you might have heard of Myers Briggs and about 4 years ago I had my personality type outlined with this as an ENFP (I could bang on about how much I love Myers Briggs, but I’ll maybe save that for another time) The “E” is extroversion – it was my strongest preference and you can see by how much in this picture below.

The “E” doesn’t mean that someone is the most obviously loud confident type of person that we often associate the word “Extrovert” to mean, but more that it is their preferred style of how they get “energy” from the world – i.e. if they are tired will they push through and go to that party to see their friends or will they go home and watch Netflix alone under a blanket?

One of the things that I’ve noticed recently is that I’ve not been as socially active as usual and it’s not that I’ve not wanted to be, more that I’ve perhaps allowed the anxiety to rule me a bit too much and not pushed forward with arranging social things as frequently.  I’m extremely grateful that I’ve got things like parkrun, run club, Guides and other good friends who will continue to help me create a structure in my life that forces me to not retreat too far and let anxiety win.  If I turn down too many social invitations, then I won’t get invited and then I get less energy from the people around me – I want to break that cycle before it starts up!

I guess the challenge I’m finding is that on the surface I will look and behave as “normal”, but inside my head I’m wasting precious brain power on the incessant whirring of thoughts.

For me, one of the best things about running is that you are forced to be at least a bit “mindful” and present in the moment and it means that annoying whirring part of your brain has to get shoved to the back of your head for a while to allow you to focus on your run.  I find this to be especially true of a trail race such as yesterday at Guiseley Gallop; you have to look down at the ground at the tree roots and rocks and plan ahead where you are going to put your feet to avoid a taking a tumble. 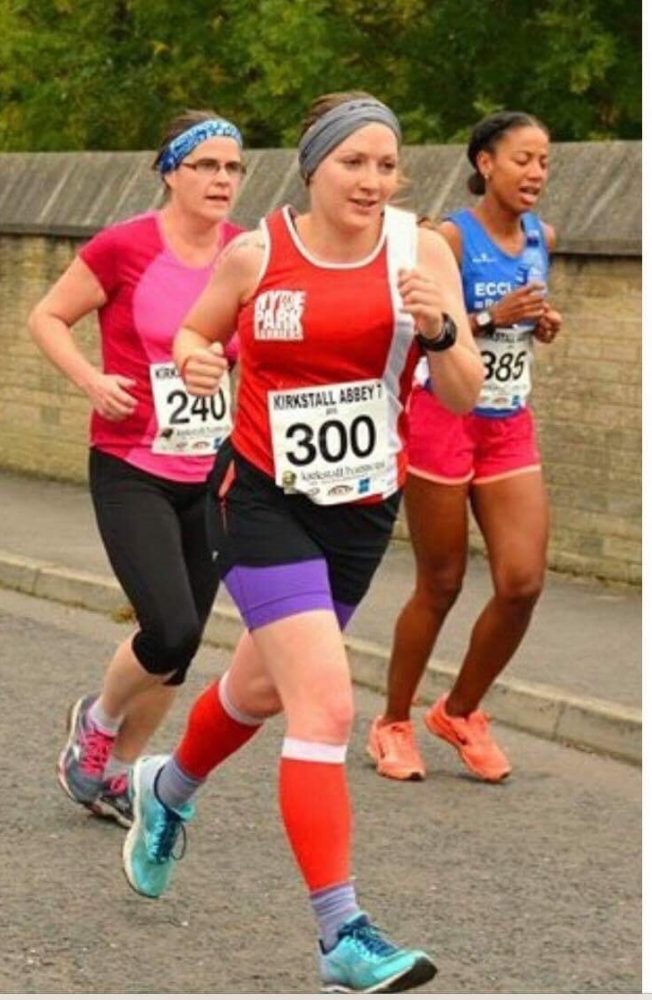 During the race yesterday I managed to not only stay on my feet (I’m well known for my clumsy running incidents), but also had the chance during the 10K of trail to process a few thoughts including my conclusion that I’m currently an Anxious Extrovert and also that one of my biggest discoveries when I had my Myers Briggs done was that – Not everyone sees the world in the same way as I do.  This was a revelation for me at the time and as basic as it seems I still need to remind myself that just because I make a conclusion or an inference of a situation, the reality and perception could be completely different to someone else.  Maybe the fact I’ve not been as sociable will lead people to think I’m generally being rude, or maybe they’ve not even noticed (there’s that anxiety again), but what about if I tell them?  Then at least they might have an idea of what’s going on.  Maybe they have similar challenges, but don’t want to say anything?  Mental health issues still have that “stigma” of weakness attached to them.  I might not see the world the same as everyone, but maybe someone else is struggling with anxiety or depression and hasn’t tried running or exercise?

I’m fortunate to have discovered parkrun, Hyde Park Harriers as well as other important running friends (yes Alan!) that give my weeks a rhythm and routine of exercise (injuries permitting) and I’m really pleased that movements like #runandtalk are there and hopefully will help people find other ways to manage their mental health successfully.

Thanks for popping in to read our blogs.

We base lots of our blogs on questions that our clients ask us, trying to dispel myths and give you sensible answers to those important questions as we go along.

Some of it is a bit silly, some of it we really go away and research and work out, so please send us your questions and we will find a way to work it into a blog.

@EilishMccolgan So I don’t get him engaged in it. I get him engaged in things where professionalism is not as important as giving an honest opinion and being yourself and people are having fun: mountain bike, snowboarding, open water swimming etc.

@EilishMccolgan I tend to turn off the athletics because everyone seems pretty media trained and talks a lot about how hard it is and the sacrifices made for the career. Very rare to hear about the positives, the privilege and fun of it all. Not a message I want my nephew to hear all the time.

@worldtriathlon @AirCanada @BritTri @georgiatb Good luck. I went to Canada ten christmases in a row. Air Canada lost my baggage 10 years in a row. Never flew with them again. Never lost my bags again. They are terrible.

@fifiglover @janegarvey1 Happy happy birthday you brilliant woman @janegarvey1 - may your year be full of love and fun and general silliness. Xx

Finding the fun in fitness .

Based in Leeds, West Yorkshire, at All Change Personal Training we can deliver personal, group and corporate training sessions tailored to fit your needs, your goals and your time schedule.

@EilishMccolgan So I don’t get him engaged in it. I get him engaged in things where professionalism is not as important as giving an honest opinion and being yourself and people are having fun: mountain bike, snowboarding, open water swimming etc.

@EilishMccolgan I tend to turn off the athletics because everyone seems pretty media trained and talks a lot about how hard it is and the sacrifices made for the career. Very rare to hear about the positives, the privilege and fun of it all. Not a message I want my nephew to hear all the time.

@worldtriathlon @AirCanada @BritTri @georgiatb Good luck. I went to Canada ten christmases in a row. Air Canada lost my baggage 10 years in a row. Never flew with them again. Never lost my bags again. They are terrible.

@fifiglover @janegarvey1 Happy happy birthday you brilliant woman @janegarvey1 - may your year be full of love and fun and general silliness. Xx

@jennyeclair Sorry to hear this Jenny. I had one out today too so I feel your pain. The noise is horrendous